Head Prefect has her say at Youth Parliament Sitting in the New Zealand Debating Chamber in Parliament House surrounded by passionate youth was an incredibly empowering experience. During the second week of the recent school holidays, I was honoured to be able to attend the 10th New Zealand Youth Parliament as the local Youth MP for Simon Watts on the North Shore. 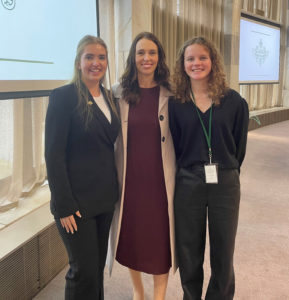 For those unaware of the Youth Minister of Parliament (Youth MP) position, the role is attached to a unique, and spectacular part of New Zealand Parliament, Youth Parliament. Youth Parliament runs every 3 years where each MP across the motu selects a young person aged around 16-19 to represent them and their electorate. Throughout the year, the Youth MPs have the privilege of working alongside their MP, initiating a community project, engaging with local schools and learning more about the role that parliament takes on within the local community – and attend Youth Parliament.

That’s me on the right of the photo with Prime Minister Jacinda Ardern and Alicia Lemmer, Youth MP for East Coast Bays.

The Auckland Youth MPs arrived in Wellington on 18 July, excited for the three days ahead of politics, speeches and debates. The first day consisted of a tour of Parliament and then the Youth MPs split into caucus meetings to discuss issues of concern. On Tuesday 19 July, the first official day of Youth Parliament began and was started off with question time in the Chamber. Like question time during Parliament, Youth Parliament question time consisted of Youth MPs questioning ministers including Prime Minster Jacinda Ardern, Deputy Prime Minister Grant Robertson, Minister of Education Chris Hipkins and Minister of Health Andrew Little. I participated in the question time segment, questioning Minister of Education Hon. Chris Hipkins about the mental health support services within the education system.

Later that afternoon, members listened to the general debate speeches of other Youth MPs. Some topics of importance included barriers in the mental health system for youth, the importance of Te Reo Māori in the education system and why the voting age should be lowered to 16. The legislative debate was the last segment to Youth Parliament and saw speeches for and against the mock bill, which aimed to abolish the youth starting-out wage. After all the speeches, the majority of the Youth MPs voted for the bill, which saw it passed in the House.

In between the debate in the Chamber, we discussed topical issues in mock Select Committees. My experience in the education select committee was one filled with compelling discussion about the issue of how sex and relationship education can be improved in New Zealand schools. After hearing from advisers and oral submissions, as a group we presented a report of our recommendations to the House.

If you would like to listen to any speeches, learn about the mock debate or read the Youth Parliament Select Committee reports, you can do so on the Parliament Website.

The 2022 Youth Parliament was an incredibly eye-opening, once-in-a-lifetime opportunity that I will definitely carry with me for the rest of my life. I encourage anyone who gets the chance to immerse themselves in New Zealand’s parliament and politics, to do so! Want to do some good in our community? Bring Back the Band! How we misunderstand anxiety and miss out on its benefits